GuildWiki
Register
Don't have an account?
Sign In
Advertisement
in: Heroes (Eye of the North), Luxons
English

Xandra is a human ritualist hero in Eye of the North. She is a Luxon and the daughter of Captain Juno.

Xandra is the daughter of Juno, leader of the Turtle Clan, from the lands of the Luxon people. Trouble in her homeland forced Xandra to leave the area at her mother's behest, traveling to the far lands of Ascalon on what was called an ambassadorial tenure—but which Canthans know to be exile.
Xandra thinks well of her mother despite the unexpected travel, realizing that an intricate web of politics is what keeps her so far from home. Juno, suspected of killing the previous captain of the Turtle Clan, has sent her daughter into exile to keep her safe—or, some say, to prevent a repeat of the same scenario. Either way, Xandra is determined to make the best of the situation, and to honor her clan with brave actions in these strange, wild lands. 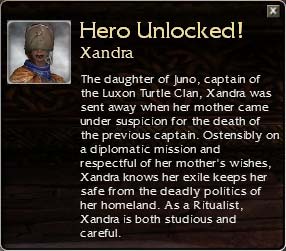 Xandra is recruited by facing her during The Norn Fighting Tournament.

Xandra starts with a Turtle Clan Raiment with an armor rating of 60.

The appearance of her armor can be upgraded to Brotherhood Armor using Cloth of the Brotherhood acquired from the Glint's Challenge.

The appearance of her armor can be upgraded to Deldrimor Raiment using Deldrimor armor remnants acquired from the Slavers' Exile (elite dungeon).

The battle quote "Wanna see something scary?" might be a reference to the opening scene of the Twilight Zone Movie.