Zehlon Reach is a quite large area in the north of Istan, mainly swamp but with an explorable city to the north-west (complete with quests), a merchant village and a shrine.

Note: All of the following quests are only available to Nightfall characters. 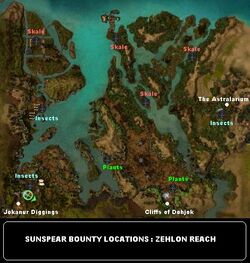 The Sunspear bounties available in Zehlon Reach and which shrines they are offered at are listed in the following table; refer to the map at right for the exact locations of the shrines. In Normal Mode, they are only available to characters whose level and Sunspear rank are equal to or less than those noted in the table. All bounties are available to all characters in Hard Mode.