Zenmai is a Hero available in Guild Wars Nightfall that can only be recruited if the player has a linked Guild Wars Factions account. She was once a member of the Am Fah.

From the Guild Wars Nightfall manuscripts:

"I know the smell of this. It smells of death."

Zenmai learned the ways of silent assassination as a member of the Am Fah gang in Cantha. She broke with her criminal gang when that organization embraced the Canthan Plague as a "gift of the gods." Now she is mo zing - a traveling blade, a masterless assassin, selling her services to the highest bidder. She feels guilty for the disease that overtook her former brothers and sisters, but the one constant in her life has been change. In the growing darkness, she has the feeling that an old, familiar force is back, working from behind the scenes. She wants to confront whoever or whatever is ultimately responsible for the plague that stalked her land. 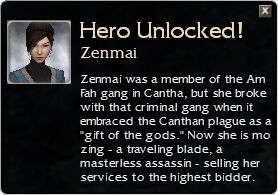 Complete the quest Chasing Zenmai, which can be obtained from Dinja in the Consulate Docks. Only accounts with access to the Factions and Nightfall campaigns may recruit her in PvE.

She can still be unlocked for accounts without access to Factions, but only for PvP, by spending faction points.

R indicates that Zenmai must be in the party

Zenmai starts with basic Am Fah armor, which is similar in appearance to Assassin Shing Jea Armor but which has its own unique variations. Her armor has an armor rating of 55 to 70, depending on her level. Like all heroes, her headgear provides an additional +1 attribute bonus based on the rune applied to it.

The appearance of her armor can be upgraded to Mysterious armor using Mysterious Armor Pieces acquired from the The Shadow Nexus Challenge Mission.

The appearance of her armor can be upgraded to Primeval Armor using Primeval Armor Remnants acquired in the Domain of Anguish and during The Ebony Citadel of Mallyx mission.

In Kaineng City, as a neutral NPC:

In Kaineng City, as an ally:

"To the Undercity! We must save those civilians before they are lost to the sewers... along with my pay."

"In Cantha, we bow very low to heroes and to emperors. That is the way I will bow to you."

Before Dasha Vestibule or Dzagonur Bastion:

Heart or Mind: Garden in Danger:

Idle quotes that do not appear to depend on the storyline: