Zhed Shadowhoof is one of the Heroes available in Guild Wars Nightfall. A member of the centaur race with serious reservations about working with hated humans, Zhed must put ancient enmities aside to face a greater enemy. He is a centaur of the Veldrunner pride, the last free pride in Kourna.

"Tell me again why I should help you. Where were you, two-legs, when my family was slain by the Kournan jackals?"

Like many races in the world, the leonine centaurs of Elona are struggling to survive. They've overcome incredible hardships, including the need to survive without help from more populous races—including, it would seem, humanity. Zhed is a centaur who's keenly aware of this last fact. He's seen his people suffer and die while the masses of humanity continue to spread across the savannah. In fact, he claims to have seen atrocities the Kournans would not dare admit. Some centaurs insist that humans are responsible for the death of their race, and Zhed certainly agrees. At best, he sees the "two-legs" as a means to an end. In the worst of times, he sees them as rivals... or prey. His dealings with humans have not been good, but if he must work with adventurers to reach his goals — and adventurers need to work with him — he'll need to set aside his animosity. How long he can be trusted is another matter entirely. 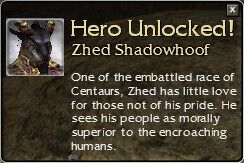 R indicates that Zhed Shadowhoof must be in the party

"Humans. They always think the world turns on their shoulders. The Centaur people know secrets that you cannot fathom. Our warriors blaze through battle like fire on a dry plain. Your kind can enslave us, but never shall you break our spirits. We fear nothing beneath the open sky."

In the Throne of Secrets: